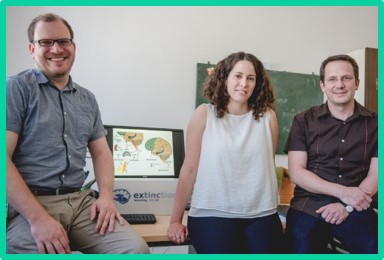 Stress helps to learn about Fear (A09)

The press department of the Ruhr-Universität Bochum reports in the news portal:

Stress helps to learn fear
New insights into extinction learning could be useful for therapies.

Stress can have positive effects on extinction learning by dissolving previously learned associations. As cognitive psychologists at the Ruhr-Universität Bochum found out, stress ensures that extinction learning is independent of context. This could be useful, for example, in the treatment of anxiety disorders. Dr. Shira Meir Drexler, Prof. Dr. Oliver Wolf and Dr. Christian Merz from the Bochum Institute of Cognitive Neuroscience describe the results in the Journal of Behavior Therapy.

Extinction learning is central for the treatment of anxiety disorders

If two stimuli occur repeatedly paired in time, the brain reacts to the presentation of the first stimulus with the answer that would actually only follow the second stimulus. Experts assume that so-called conditioning is involved in the development of anxiety disorders. These can be treated, for example, by gradually confronting those affected with the anxiety-triggering object. “Extinction is thought to play a major role in this Exposure Therapy,” says Christian Merz. Those affected learn new associations, for example that a previously frightening stimulus is not a danger.

“However, extinction learning is strongly context-dependent,” Shira Meir Drexler knows and gives an example: “If someone learns in a psychotherapy practice that a spider is no reason to be afraid, it could be that he still reacts anxiously to the eight-legged friend in his own cellar.

Colourful light as an anxiety-triggering stimulus

The Bochum psychologists now showed that this context dependency does not occur if a stress situation precedes extinction learning. The study involved 40 subjects for three consecutive days. On the computer they saw pictures of an office with a desk lamp. If the lamp shone in a certain colour, a mild electrical stimulation of the skin followed shortly afterwards, which was not painful, but unpleasant. Other colours were not accompanied by electrical stimulation. In this way, the participants learned how to combine light of one colour with its unpleasant appeal.

On the basis of skin conductance measurements, the researchers showed that the test persons reacted anxiously to the presentation of this light colour even before electrical stimulation.

The following day, half of the subjects were exposed to a stressful situation: they had to hold one hand in ice water and were filmed and observed by an investigator. The other half did not have to undergo this stress test. Afterwards, everyone saw pictures of the brightly coloured desk lamp, which was not followed by electrical stimulation; however, the lamp was no longer in the office, but in a library. On the third day, the team presented office and library pictures with colored lamps without any electrical stimulation.

In the office and library context, test persons in the stress group reacted little anxiously to the light colour, which had announced an electrical stimulation on the first day. They had the knowledge that no more unpleasant charm occurs, transferred from the library context to the office context. It was different with non-stressed subjects. They continued to show an anxiety reaction when they saw the colour of light in the office that had been accompanied by electrical stimulation on the first day. However, like the control group, they were not very anxious about library photos. Extinction learning had only taken place in a special context.

“Pharmacological studies have shown that the administration of the stress hormone cortisol can make the treatment of anxiety disorders more successful,” says Oliver Wolf. “Our study provides evidence of an underlying mechanism.” As part of the Sonderforschungsbereich 1280, several Bochum research groups plan to investigate whether stress before exposure therapy actually improves its effectiveness.

The complete article in German can be read here >>

The Article can be downloaded here >>